Arriving back from Hong Kong on the 17th of December, although feeling jaded from my long haul flight, I hit the ground running.

Calls to the florist for table posies and flowers for the entrance and living room were arranged, then on to the butcher and fishmonger for my Christmas order, after that the bottle store for the drinks order.

Needless to say, after the culinary trip in Hong Kong my pallet was feeling rather jaded, not to mention my overloaded system. As a result enthusiasm for the Christmas preparations was a bit difficult to muster. The end result was thankfully well received.

Instead of the usual Christmas pudding I decided to make something a little different this year; one of my favourites – Apple, sultana and cinnamon cake, served with a vanilla and brandy cream. This cake is good to serve for either tea or as a dessert. It is also best when eaten the day after it being baked, which helps a lot when pushed for time. 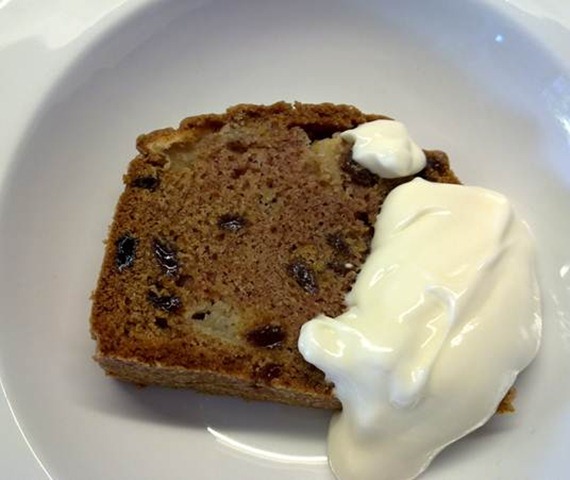 For the Vanilla Brandy Cream

Soak the sultanas in warm water for about 20 mutes

Pour the oil in the bowl of the mixer and add the sugar. Beat until the oil and sugar become homogenised. Add the eggs one at a time, and beat until the mixture increases in volume and resembles a thin mayonnaise.

Sieve together the flour, spices, bicarbonate of soda, cream of tartar and salt. Add the sieved flour gradually to the oil and sugar mixture. Mix thoroughly then add the apples, drained sultanas and lemon rind, mix thoroughly. The mixture will be stiff, and show pieces of apple and sultanas coated in cake mixture.

Spoon the mixture into the prepared cake tin and bake for at least 1 hour, until a toothpick inserted in the middle of the cake comes out dry.

Remove the cake from the tin and cool on a wire rack.

Mix all the ingredients together and chill until required.

The cake may also be spiked with some brandy after removing from the oven.

Of the many Christmas cake recipes under my sleeve, this one I enjoy making the most often. It is moist, not too dark or overly rich and always a pleaser at family gatherings. For me it also doubles as a perfectly lovely Christmas dessert.  An added bonus is that it is also very easy to make. The cake is delicious served with coffee, tea or sweet wine. 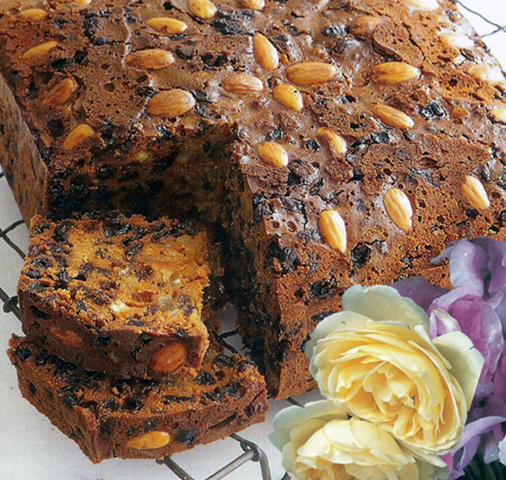 Start the first part of this recipe the day before. Combine the dried fruit, candied orange and brandy in a large bowl, cover and leave to macerate overnight.

You will need a 23cm square cake tin for this recipe. Line the base with a double layer of brown paper, and then line the sides with four layers of brown paper. Cut a further layer for the top of the cake. Lightly grease and snip a few holes in it and set aside while you mix your ingredients for the cake.

Finely chop about 150gm of the almonds, reserving about 100gm to decorate the top of the cake.

Beat the butter and sugar until pale and fluffy; add the egg mixture a little at a time, beating well after each addition. Then stir in the fruit and chopped almonds, add the flour and baking powder, stir until well combined.

Spoon the mixture into the prepared pan. Smooth the top and decorate with the reserved almonds.

Cover the cake with prepared brown paper and bake on lowest oven shelf for 5 hours. Turn off the heat and cool in the oven overnight.