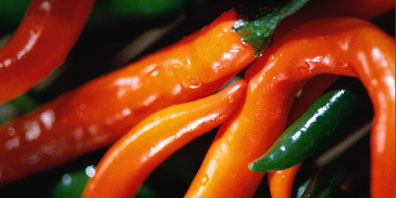 It is the end of the chilli season in my garden but I have to say it has been a fruitful year, my chilli bushes produced an abundance of gorgeous fruit in all shapes and sizes. I used them in salsa, dips, jams, relishes, sauces, cooking and dried some for use in various spice mixes.

This is a rather nice chilli jam recipe which when served, people tend to wade through by the spoonful.

In a non-re-active pot combine the peppers with apple cider vinegar. Cover with a lid and cook for about 20 minutes or until the peppers have softened. Drain the pepper mixture in a colander pressing gently with the back of a wooden spoon to extract the excess liquid.

Transfer to the chillies to a blender and puree the peppers. Press the puree through a sieve to remove the skins, discard the skin.

Place a pot on medium heat, add the puree and the sugar a little at a time, mix until sugar has dissolved. Continue to cook for about 40 minutes, stirring occasionally. Remove when mixture resembles a jam texture. Allow to cool and transfer into jars.